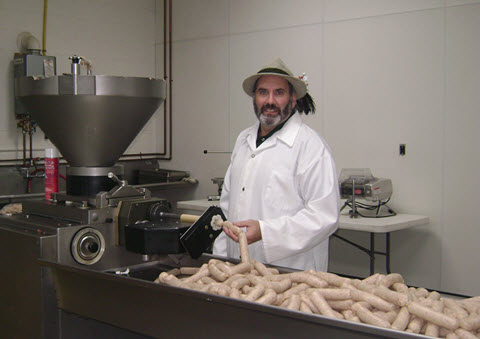 With more than 70 years of combined experience, owners, Mike & Lynette Sloan have dedicated their lives to producing and making world-class bratwurst and sausages.

Success for the Sloan’s has been sweet and long-lived. Mike’s career began at a young age at his parents meat processing business in Swiss, MO. This is where he perfected his skills and recipes, working his way to the president and operating manager of his family’s business, Swiss Meats & Sausage Company.

In June 2011, Mike & Lynette ventured out on their own; purchasing and old auto parts store in downtown, historic Hermann, MO. With the help of friends and contractors, they began renovating immediately and opened the doors to the Hermann Wurst Haus in only 75 days.

Today Mike and Lynette are living and breathing their true passion, owning their own business where they are creating award-winning bratwurst  and sausages for everyone to enjoy.

There have been a lot of highlights in Wurst Haus History.  Here are a few of the more notable moments:

July 2011 – Construction tear down, remodel, plumbing, concrete work begins on future Hermann Wurst Haus.  Wurstmeister Mike gets rid of all the fan belts, spark plugs and anything else he doesn’t think he will need to make sausage with.
September 1, 2011 – Hermann Wurst Haus opens after a fast and furious construction phase with Wurstmeister Mike, wurst wife Lynette, and two associates.  Twenty two seats are available.  Mike wonders how they will fill those seats.

October 2011 – Cardinals win the World Series, same year as the Wurst Haus opens – a sign from above??  Octoberfest all month.  O.M.G.

December 2011 – Christmas at the Hermann Wurst Haus, our mail order program begins, 50 packages are sent out to lucky buyers and givers.

February 2012 – Hermann Wurst Haus in conjunction with the Hermann High School, hosted a fundraiser dinner & auction for the Driving with Distractions Program, netting $13,000 plus dollars.

March 2012 – Hermann Wurst Haus wins its first ever awards for a meat and sausage competition, 14 awards in all!

July 2012 – Wurstmeister Mike is elected President of the American Association of Meat Processors at their annual convention in Minneapolis, MN.  AAMP is the largest meat trade organization in North America, representing the mid to small sized processors.  A nice honor for Mike and the Wurst Haus.

August 2012 – New tables, inside seating and outdoor patio seating are added.  The Wurst Haus now seats 90 people.  Equipment is upgraded to keep up with demand.

December 2012 – Large crowds during Christmas, Santa Claus is on site for pictures, presents and good cheer.

January 2013 – Time to reflect, plan for the year and be thankful

Christmas 2013 – Deer processing completed, tons of deer sausage to make, holidays are here and cold beer to drink.  Life is good and busy.

February 2014 – First Sausage Making 101 Class is filled to over flow capacity with 44 students.

March 2014 – More awards for Wurst Haus from Wurstfest and the MO Association of Meat Processors, Makin’ Bacon 101 Class is a sell out again, new German chef Hansel is hired.

May 2014 – Wurst Haus Crème Sodas and Root Beer is available by the draft cold mug.

July 2014 - Wurstmeister Mike and Wurst wife Lynette attend the American Association of Meat Processors annual convention where Mike is recognized for his years of service to the association as President as he hands the gavel to the new President Tim Haen of Haen Meat Packing, Milwaukee, WI.

September 2014 - Wurst classes start in September, all are sell out, creating much recognition of the Wurst brand and great PR. Sales are pretty good too!

October 2014 - New Smokehaus arrives and put into place, old one is quickly sold. The demand for our products is just crazy, what's wrong with people!? Octoberfest all month long, OMG 4.

December 2014 - Hermann Wurst Haus featured story in Independent Meat Processor, a national trade publication. Editor Sam Gazadiak flies in from PA and spends about 5 hours at Wurst Haus, taking pictures and interviewing Wurstmeister Mike about his career and Wurst Haus. He tells Mike he (Sam) has been all over the U.S.A. writing meat stories and he has never experienced anything like the Hermann Wurst Haus. He thought highly of it to tell Mike before he flew back that Wurst Haus was going on the cover. Our first cover but not our last. Christmas mail orders are pouring in, sidewalk traffic pouring in, custom orders pouring in, what's wrong with all these people!?

March 2015 - Many more awards won by Hermann Wurst Haus at the Missouri Association of Meat Processors, including the Best of Missouri Award for our snack sticks. Mike is a speaker at the convention, speaking on marketing. Wurst Haus wins more awards at the Hermann Wurstfest including The Best Of Show for its Sweet Peppered Bison Bologna. Wurst Haus continues building its brand and credibility.

October 2015 - Octoberfest all month, where do all these people come from, we are very efficient, OMG

March 2016 - Hermann Wurstfest brings huge crowds, big competition, and Hermann the Bratwurst mascot is a big hit with the crowds and kids.

April 2016 - Antique Show at the Festhalle, Hofgarten, and Tin Mill bring out large crowds. We feature our German Sampler plate and Bratwurst and Hot Dog cart is on the street corner, fun, fun, fun!

May 2016 - Hermann Maifest, opening of the Wurst Comedy Night Ever at the Hermann Wurst Haus featuring dinner, lights, show with Longhorn the Comedian, patriotic cowboy from Texas, by way of St. Louis!