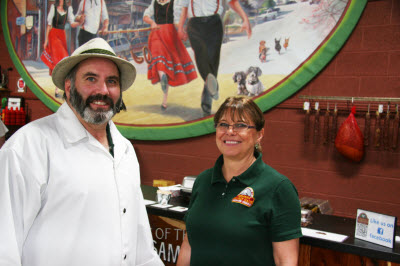 Favorite Bratwurst: all of them :)

Mike has been in the meat processing industry for more than 40 years. He began his career at his parents’ meat processing plant in Swiss, Missouri. At Swiss Meats and Sausage Company he  worked his way up to president and operating manager. Mike and his wife, Lynette, ventured out on their own in June 2011. They opened the doors to their own business on September 1, 2011. The Hermann Wurst Haus is located in historic, downtown Hermann, Missouri. Mike has free rein at the Hermann Wurst Haus where he can showcase his expertise and creative bratwurst and sausage recipes.

Over the course of Mike’s career he has won more than 500 international, national, state and regional awards; including 14 best of show honors and 29 International awards from the German Butcher’s Assoc. in Frankfurt, Germany.  He has served as as president of the American Association of Meat Processors (AAMP) and past treasurer. He has served as the chairperson for the Hermann Wurstfest for many years. He is a past president of the Missouri Association of Meat Processors (MAMP). Mike is also a two-time hall of famer; inducted into the Hermann Wurstfest Hall of Fame in 1997 and in 2012 he was inducted into the MAMP Hall of Fame.

Lynette has worked beside her husband, Mike, for more than 20 years. She is the co-owner and retail manager at the Hermann Wurst Haus where she is responsible for running the store and the deli, ordering merchandise and thrives in customer service.

On her days off Lynette enjoys reading a good book, shopping and spending time with  her grandkids.

Doug’s background in engineering makes him the perfect office manager; he has a great eye for detail and  keeps the Hermann Wurst Haus running smoothly. Doug wears many hats as the office manager including accounting,  human resources and you never know when you’ll see him  helping Mike with  butchering  or working behind the cash register in retail. Doug started working for the Hermann Wurst Haus in June 2011, where he assisted in the construction of the shop and setting up the business.

Doug is enthusiastic about the outdoors and spends his free time on his family farm where they do many types of native habitat restoration to increase the plant and animal diversity.  He is an active member of Quail Forever Missouri River Valley Chapter and enjoys cedar woodworking.

Patrick is the son of Doug and Ruth Mallory from Paris, MO.  He attended the University of Missouri, Columbia and obtained a Bachelor's Degree in Agricultural Education.  While at the university, Patrick worked in the UMC Meat Lab.  He is passionate about making sausage and enjoys fishing, hunting and trapping.